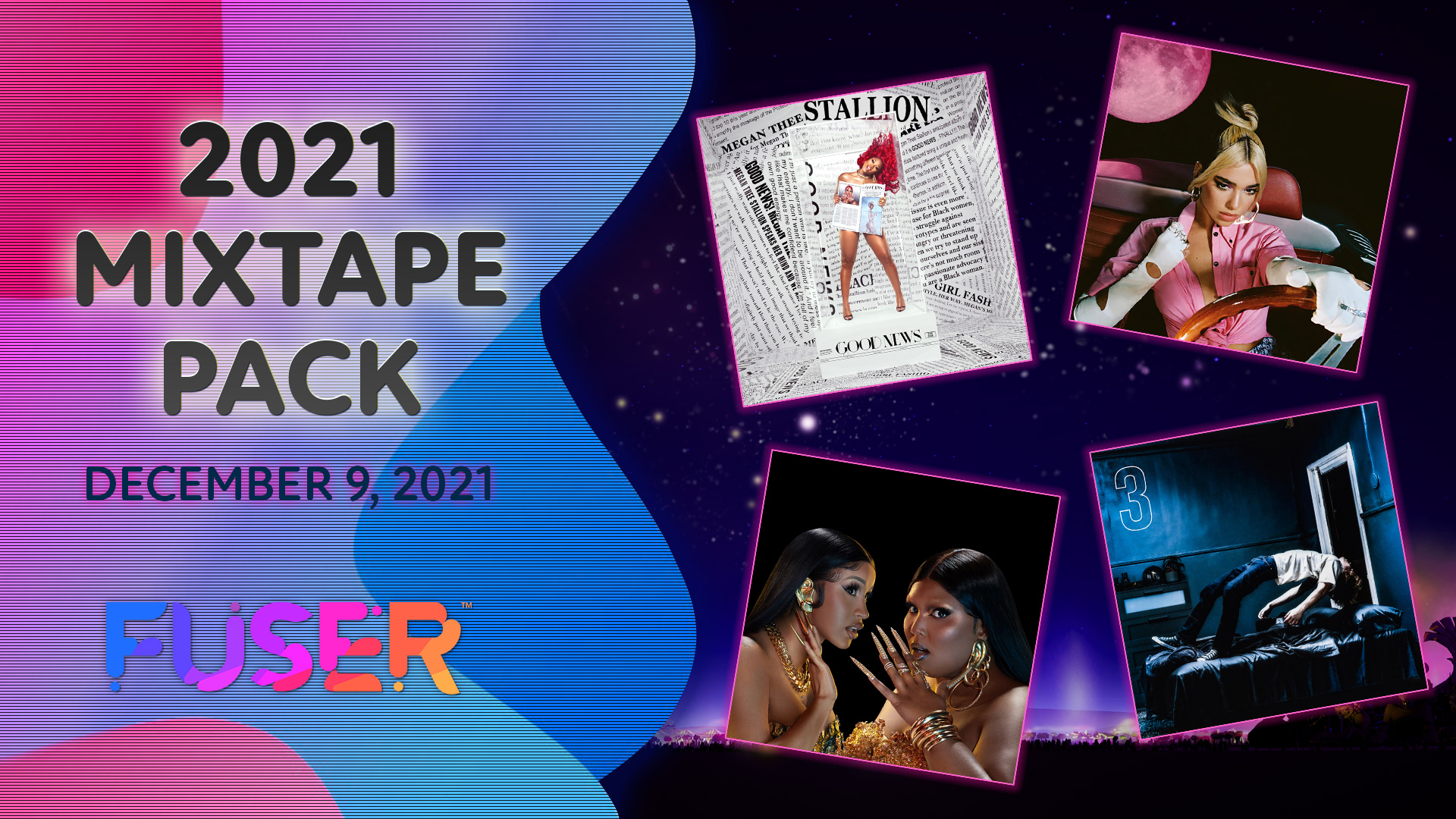 As the temperature outside gets cooler, things are heating up in FUSER with this month’s DLC: the FUSER 2021 Mixtape Pack! This collection of songs is your robust toolbox for crafting mixes inspired by this memorable year! Don’t forget to hit the Diamond Shop and give 2021 a stylish sendoff by dressing your avatar in the latest and most fashionable threads.

The 2021 Mixtape Pack also comes with a bonus event, beginning December 27. It will be available to purchase later this week on all platforms except for Nintendo Switch, where it will release later during the month.

“Savage” by Megan Thee Stallion is an award winning track that is sure to enhance the impact of your mixes! The song has been nominated for the MTV Video Music Awards Song of the Year and won Best Hip-Hop song, in addition to being recognized by the People’s Choice Awards and the Soul Train Music Awards. The song charted globally, entering the top 10 in Australia, Hungary, Ireland, and the United Kingdom. In the United States, the Houston, Texas native also earned a 4x Platinum certification from the RIAA.

Megan Thee Stallion puts her prowess on display for this beloved song that took the world by storm! This powerful, high energy track has plenty of complexity, and the low-key groove on the drum disc gives it room to shine. The instantly recognizable lead instrument disc offers a gritty performance on keys and vocal ad libs that will be a blast to manipulate into new mixes!

“Levitating” by Dua Lipa was featured on her internationally successful album Future Nostalgia, and now it’s joining the FUSER party! This danceable track is the longest running top ten song on the US Billboard Hot 100 by a female artist, becoming Dua Lipa’s second top five single in the United States. The song has been nominated for multiple awards including the 2021 MTV Music Video Awards Song of the Year and Song of Summer. “Levitating” has already earned 2x Platinum certification in the United Kingdom, 4x Platinum in the United States, and 5x Platinum in Australia.

The drums set a steady and funky foundation for the track’s celebratory vibe. The lead instrument disc features a sparse but creative synth sound that adds a strummed electric guitar part for the pre-chorus and lifts the energy of the whole arrangement. Dua Lipa’s controlled and joyful lead vocal performance is a playful, rhythmic melody you can’t help but sing along to!

“Rumors” by Lizzo ft. Cardi B is an empowering anthem delivered with style from this musical duo made in heaven. This groovy track is Lizzo’s first release since her critically acclaimed third studio album Cuz I Love You, and quickly grabbed the number one spot on the US Hot R&B/Hip-Hop Billboard chart as well as rising to number four on the US Billboard Hot 100! The song boasts over 80 million streams on Spotify and was Lizzo’s first entry on the Billboard Global 200.

The dreamy lead instrument disc features a soft guitar and bells, punctuated by a clean, explosive horn. The electrified bass and crisp drum disc mix perfectly with songs featured in the November Pass The Beats DLC Bundle, as well as any other song with a strong bass feature.

“STAY” by The Kid LAROI brings his globally celebrated style to the FUSER festival! This performance earned The Kid LAROI two Australian Recording Industry Association Award nominations for Best Pop Release and Best Artist. The track enjoyed global commercial success, becoming the first song from the artist to earn the number one spot on the Billboard Hot 100, where it stayed for four consecutive weeks!

The Kid LAROI delivers heartbreaking and honest lyrics on a gentle and catchy melody. The dramatic synth and keyboard featured on the lead instrument disc blend well with other genres, and the punchy and simple bass emphasizes the song’s raw lyricism. The drums’ classic driving rhythm offers a solid foundation for future mixes and can help build anticipation for mind-blowing drops or smooth rhythmic transitions.

This incredible DLC bundle features the FUSER 2021 Mixtape Look Pack! This eye-catching collection includes the Metallic Military Cap, Metallic Horned Mask, and the Iridescent Track Jacket. FUSER is all about showcasing your unique style, so dress your avatar to represent you and your signature aesthetic! Don’t forget to do a Stage Kit check to make sure it’s up to date. Give your exported mixes a backdrop that really pops!

“Levitating” by Dua Lipa, “STAY” by The Kid LAROI, “Rumors” by Lizzo ft. Cardi B, “Savage” by Megan Thee Stallion, and the FUSER 2021 Mixtape Look Pack will be available for purchase as a bundle for $8.99 USD or regional equivalent. Buy it on December 9 directly in the game or on your platform’s digital store.

We’ll cover mixes that players created with the 2021 Mixtape Pack on FUSER Guest Sessions later this week—follow our social channels for dates and times. You’ll probably see these mixes first on the Diamond Stage!