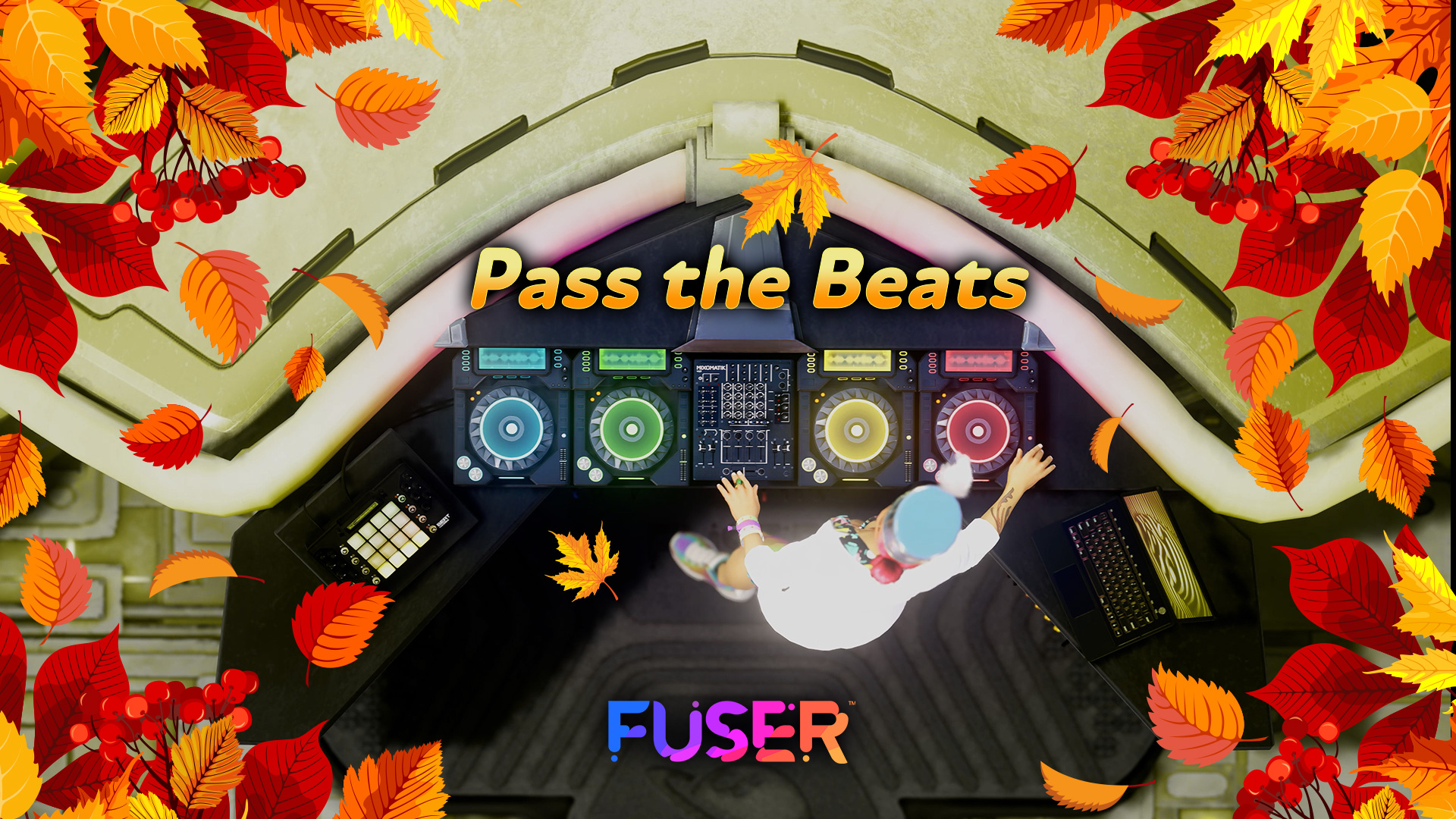 Get the Pass the Beats Pack on November 4
Downloadable Content

Clear your schedule and your living room dance floor for this month’s DLC—the new Pass the Beats Pack! This bundle is overflowing with sensational sounds from internationally-acclaimed artists and comes with high-visibility cosmetics to solidify your super freaky style.

What’s three times four? Check out the 4️⃣ brand new songs and 4️⃣ new cosmetic items that you’ll get on November 4 in the Pass the Beats Pack:

The monthly Pack also comes with a bonus event available later this month. You’ll have the beats to make the FUSER community feel the heat! 🔥

“Super Freak” by Rick James is a well-known funk anthem that is arguably one of the most signature songs from James’ career. The song performed well across the globe reaching the top 10 in Belgium, the Netherlands, New Zealand, and the United States where it sat atop the US Billboard Hot Dance Club Play Chart in the number one spot. The track earned James a UK BPI Silver certification as well as RIAA Gold in the United States.

The lead vocals perfectly highlight the zany and suggestive nature of James’ signature style and highlight the infectious background vocals you can’t help but sing along to! The star of the loop is the ingenious bassline that showcases the musical proficiency of Rick James. The drum disc keeps the energy up with a classic R&B groove, while the lead instrument disc holds amusing 80’s synth sounds that will come in clutch while making ethereal sounding mixes!

“Hip Hop Hooray” by Naughty By Nature is a RIAA Platinum certified track from the B-side of The Hood Comes First, the New York based trio’s 1992 album. Sampling some of the most danceable songs of all time, the track became a smash success earning a number one spot on the US Billboard Hot R&B/Hip-Hop Songs, in addition to charting in Australia, Canada, Germany, Ireland, the Netherlands, and the United Kingdom--just to name a few! Its star-studded music video also made quite the impact. The signature Rap/Hip-Hop sounds of the 90s are immortalized in this party-starting track.

The lead vocal disc contains a smooth flow that is chock-full of captivating rhythmic lines. The lead instrument disc offers comforting electric keyboard sounds that beautifully complement the laid-back lines from the bass disc. The drums are sampled from one of the most famous funk songs of all time. Can you hear all the various samples contained in this track? Grab it to add some soul and music history to your mixes!

“Low Rider” by War is a well-known and fun filled track that bends the constraints of genre in an enthralling fashion that forces the listener to groove along. The band originated in Long Beach, California forming in 1969 and breaking cultural barriers with a vast and multi-ethnic lineup. The diversity of the musicians allowed them to blend various genres to craft the sound we know today.

“Low Rider” has made countless appearances in popular culture, having been featured in many films and shows and covered by a multitude of legendary artists.  The song received critical acclaim, entering the US Billboard Hot 100 Top 10 and earning the number one spot on the US Hot R&B/Hip-Hop Songs chart.

The Latin-inspired drums lay a groovy foundation bursting with sounds to help add a sense of celebration to your mixes. The iconic bass is booming and holds down the main groove for the entirety of the loop. The soft but effective sounds on the lead instrument disc help maintain the relaxed and playful vibe of the song. The lead vocals are delivered with impressive swagger accompanied by the instantly recognizable horn line we all know and love.

“Shook Ones. Pt. II” by Mobb Deep hails from the group's 1995 album The Infamous where it served as the lead single. Mobb Deep originated in New York, New York and rose to fame becoming one of the most successful Hip-Hop duos of all time having sold over 3 million records worldwide. This track has made its mark on popular culture having been sampled by world class acts and featured in blockbuster films.

The song was honored by Pitchfork Media with a top 25 spot on their list of Top 200 Tracks of the 90s, and Rolling Stone helped cement its legacy with a spot on the Top 50 Greatest Hip-Hop Songs of All Time. The song is a moving original work that pays homage to some legendary jazz tracks setting a complex and effective musical foundation.

The lead vocal disc boasts a distinctive lyrical style that has the potential for impressive emotional impact when blended with contrasting genres. The sample on the lead instrument disc maintains a near industrial style that has strong potential for Dance or EDM mixes. The resonant bass is sparse and lays a solid base for the rest of the arrangement to shine. The drum disc sustains the 90’s Hip-Hop style of the song as well as contributes to the free and easy nature of the track.

This robust DLC bundle includes the Pass the Beats Look Pack! This stylish Look Pack contains the Reactive Glow Bear Head, Reactive Glow Baggy Joggers, Reactive Glow T-shirt with Beads, and the Reactive Glow High Tops. Your avatar should look just as unique as your mixes sound, and new threads are a great way to further customize your FUSER experience. Use outfit and Stage Kit customization to showcase your brilliant personality while you mix the hits!

“Shook Ones. Pt. II” by Mobb Deep, “Hip Hop Hooray” by Naughty By Nature, “Super Freak” by Rick James, “Low Rider” by War, and the Pass The Beats Look Pack will be available for purchase as a bundle for $8.99 or regional equivalent. Buy it on November 4 directly in the game or on your platform’s digital store.

Learn more about FUSER or listen to more late-night tracks while you hang out with fellow music mixers.  Catch FUSER Guest Sessions or watch the Diamond Stage—follow our social channels for dates and times!